Granular Computing can be conceived as a framework of theories, methodologies, techniques, and tools that make use of information granules in the process of problem solving. In particular, the granular computing has been implicitly used in geospatial representation and processing in order to conquer the complexity and diversity of a large geographic data set.

Geocoding is the process of taking an address or named location and returning a longitude and latitude. With a georeferenced longitude and latitude, many geospatial analysis and processing are made possible, such as mapping, routing, proximity searches, etc. Since our focus is on “georeferenced” spatial parts, we shall assume spatial is meant geospatial from this point. Additionally, the theory formulated in this article, can be extended to other geospatial analytic problems. 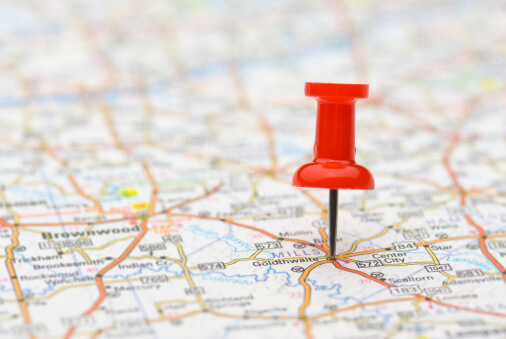 Figure. Geocoding is the process of converting addresses (like a street address) into geographic coordinates (like latitude and longitude), as if the dropped red-pin is the result of the geocoded address.

Explaining the theory of geospatial granular computing, we shall explore the following topics.

As a side note, another unification effort is the theory based on Geospatial Semantic Web [ZhZhLi15]. Geospatial semantic web is using RDF representation of spatial data and GeoSPARQL as query language. The semantic representation can provide infrastructure to a knowledge engine to support powerful reasoning and information retrieving from heterogenous data sources. However, the downside of representing structured geospatial data in these languages can result in inefficient data access, which is the main reason that we stay away from this approach.

In a philosophical sense, granular computing has been foundational to human ability to analyze the complex world, by abstracting into a connected and hierarchical levels of granularity. To help reasoning with a specific interest, we come to switch among different granularities. For instance, if we are planning for a long distance trip, we would first plan in the macro country-level travel. Then we assume in the context of destination country, we come to switch to micro city-level, and then street-level granularity to reach a point of interest. By focusing on different levels of granularity, the relevant levels of knowledge can enhance understanding of the inherent knowledge structures. The structural system thinking is thus essential skill in human problem solving and hence has a very significant aspect of intelligence, in this case spatial reasoning.

From the book, A Unified Framework of Granular Computing (chapter 17 of [PeSk08]), Yiyu Yao presented the granular computing offers these three unified perspectives across problem domains. 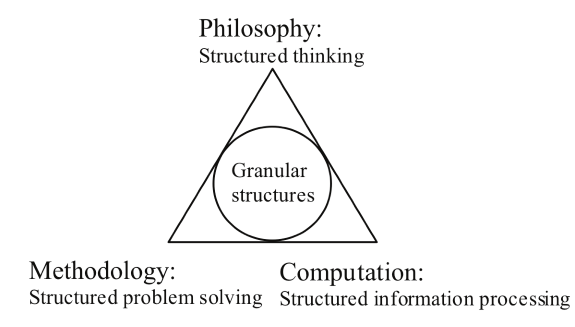 Most importantly, Yao argued the important advantage of converging different domains into a share conceptual framework using granular computing, can extract high-level commonalities of different domains and synthesize their results into an integrated whole by ignoring the particular low-level details. Subsequently, the shared concepts make explicit where the ideas hidden in domain-specific discussions in order to arrive at a set of domain-independent principles.

By overlaying the granular computing concepts onto the geospatial domain, the former integration of the three perspectives on system thinking, results in a holistic understanding of geospatial processing that emphasizes structures embedded in a web of granules.

In geocoding system, granules may be varying with layers at different levels, for example, a country as a granule in the country layer or a province as a granule in the province layer. In any layer, granules can be abstractly represented various divisions of spatial entities. Consider the application of the geocoding system, a spatial granule can be considered as a focal point of interest at a certain stage of locating a requested address.

For the spatial granule’s form, we shall use vector representation to describe their geometry. The geocoding system is not only concern about polygons, such as countries and regions. It also includes points and polylines, when the geocoding calculation is down to the street level address.

In a map, geographic data is usually organized into layers. Each layer represents some consistent concept about geographic features. Geographic features can be classified into three key geometric data types, namely point, polyline and polygon. Correspondingly, these geometries can represent location feature, linear feature or areal feature. Many data types such as label, measurement and quality can be attributed to each feature. Without losing generality, the map model adopts one hierarchy of combinations.

Figure. The geospaital granule structure of a typical map model.

This is one of many possible methods to describe a concrete map model. But the world view in terms of granules and multiple levels of granularity represented by layers, forming a connected and hierarhical structure are the principles of granular computing.

For simplicity, the following vector representation is used:

In a textual context, we use the following notation to specify a spatial value:

The important step to formulate the theory, we need to model the atomic granule where the information processing originated. A Granular Relation is the atomic represention of the spatial granule. Since this relational representation is the theoretical foundation to derive the theory, we shall describe the granular relation with a better mathematical precision and generality.

To qualify as as spatial granule, we do not require the existence of alphanumeric attributes (e.g. \(\{(S:r)\}\) represents a layer including a single feature). However, a layer must have at least one spatial attribute. To define more formally a layer, we follow the complex objects approach in [AbBe95] and map modeling in [ScVo89]. Layers are typed granules defined as follows.

Types are constructed from domains, attribute names, and the set {} and tuple () constructors. Each layer is an instance of a type which is defined as follows:

We illustrate this definition by examples of layers and associated types:

Below is a generic definition of a map model:

where \(\{A_i:AT_i\}\) denotes an enumeration of named types (the alphanumeric attributes). \(AT_i\) translates to a basic alphanumeric type that is supported by geospatial system. \(S\) denotes the name of a spatial attribute whose type is \(\triangle\). \(\triangle\) can be one of the geometric type of Point, Polyline or Polygon that are supported by the geospatial system.

As an illustration, the following geospatial granular structure can be defined:

The granular relations are,

The granular layers are,

The map model is formed by,

Note: Geocoding process does not require the full set of granular algebra defined here. These definitions can be extended to perform additional geospatial analytics.

The granular algebra starts from a view of relational algebra as a many-sorted algebra. This type of algebra is well developed in many systems [AbBe95] [GuSc93a] [GuSc93b] [ScVo89], including some popular commercial spatial database systems [RiMiVo02] [ScVo92]. The objects of the algebra are atomic values such as string, number or boolean values as well as relations. The operators of the algebra include arithmetic operators (e.g. addition, subtraction) on numbers as well as the relational operators (e.g. selection, join).

Following the geospatial granular relation, the spatial attribute is part of the relation. Spatial types and operators are embedded in the algebra as part of the sorted object. The spatial types encapsulate geometric representation such as point, polyline and polygon, that we have defined in geospatial granule section. Furthermore, the specific spatial operators are introduced for accessing and operating on these spatial attributes. We shall only have a glimpse at the spatial operations here, another article should be devoted for the full treatment of this topic.

Our granular algebra begins with the following set of sorts:

After equipping with all the formulation with geospatial granular relation and algebra, we are finally ready to breathe live into the geocoding process. The layers are defined as:

Geocoding queries are composed according to the granular algebra. For these example compositions, the expressions are written in a functional programming style; however, the precise language will be not defined in here.

Geocoding process can be easily observed as a process that is refining a sequence of progressively smaller spatial granules to a atomic spatial granule. However, the granular computing allows to define and process layers flexibily by using the set of spatial/relational operators. As a result, the granular computing is shown to be a powerful conceptual framework to express a geospatial problem and formulate a solution.

To preview the full utility of the granular algebra, the queries can go beyond the geocoding process. We can perform geospatial analytics with the granular structure and processing.

The following illustrates a few geospatial analytic queries, can be expressed with our geospatial granular computing.

We have presented the essential concepts of granular computing applied to the geospatial domain. Although we avoided using any existing GIS technologies and standards in here, for those readers, who is well-versed with the state-of-the-art GIS, can easily draw the connections to the actual geospatial implementation. By digesting the abstract discussion, we can concentrate on the high-level commonalities of the structural thinking in granular computing; subsequently, we can synthesize similar structural thinking to other domains to solve interesting spatial problems.