The paradigm of learning by trial-and-error, exclusively from rewards is known as Reinforcement Learning (RL). The essence of RL is learning through interaction, mimicking the human way of learning with an interaction with environment and has its roots in behaviourist psychology. The positive rewards will reinforce the behaviour that leads to it.

The reinforcement learning problem can be described formally as a Markov Decision Process (MDP): it describes an environment for reinforcement learning, the surroundings or conditions in which the agent learns or operates. The Markov process is a sequence of states with the Markov property, which claims that the future is independent of the past given the present. The sufficiency of the last state makes that we only need the last state to evaluate the agent future choices. While deep neural network requires a lot of supervised training data, and inflexible about the modelled world changes. On the other hand, reinforcement learning can handle the world changes and maximize the current selection.

Using PySC2 helps to understand the practical aspect of reinforcement learning, rather than starting with toy example, the complexity of StarCraft II game is more realistic, the AI needs to balance resources, building, exploring, strategizing and fighting. The balance of multiple objectives and long term planning in order to win, makes the game felt realistic in complexity. The current techniques are mostly focus on single agent learning. The potential is to extend into multi-agents learning that applying collaborative game theory (Do you remember the movie “A Beautiful Mind”?) 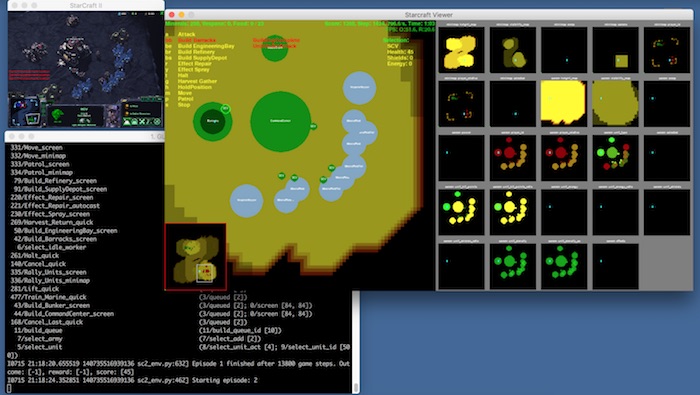 Games are ideal environments for reinforcement learning research. RL problems on real-time strategy (RTS) games are far more difficult than problems on Go due to complexity of states, diversity of actions, and long time horizon. The following is my practical research notes that capture this learning and doing process. This article is intended to provide a concise experimental roadmap to follow. Each section starts with a list of reference resources and then follows with what can be tried. Some information is excrept from the original sources for reader convenience, in particular being able to learn how to setup and running the experiements. As always, ability to use Python is fundamental to the adventures.

PySC2 is DeepMind’s Python component of the StarCraft II Learning Environment (SC2LE). It exposes Blizzard Entertainment’s StarCraft II Machine Learning API as a Python RL Environment. This is collaboration between DeepMind and Blizzard to develop StarCraft II into a rich environment for RL research. PySC2 provides an interface for RL agents to interact with StarCraft II, getting observations and sending actions.

You can run an agent to test the environment. The UI shows you the actions of the agent and is helpful for debugging and visualization purposes.

There is a human agent interface that is mainly used for debugging, but it can also be used to play the game. The UI is fairly simple and incomplete, but it’s enough to understand the basics of the game. Also, it runs on Linux.

Running an agent and playing as a human save a replay by default. You can watch that replay by running:

This works for any replay as long as the map can be found by the game. The same controls work as for playing the game, so F4 to exit, pgup/pgdn to control the speed, etc.

This repository implements a Advantage Actor-Critic agent baseline for the pysc2 environment as described in the DeepMind paper StarCraft II: A New Challenge for Reinforcement Learning. It uses a synchronous variant of A3C (A2C) to effectively train on GPUs and otherwise stay as close as possible to the agent described in the paper.

Progress that confirmed by the project

Unfortunately, the project stopped before achieving the following objectives.

Download the mini games and extract them to your StarcraftII/Maps/ directory.

When you extract the zip files, you need to enter iagreetotheeula to accept the EULA.

There are few more requirements to note.

run and train (the default spawning 32 environments are too many, reduced that to 16):

run and evalutate without training:

You can visualize the agents during training or evaluation with the --vis flag. See run.py for all arguments.

After an hour of training on the MoveToBeacon mini-game, approx. 8K episodes, the agent can almost track the beacon optimally. (train on GPU TitanX Pascal (12GB))

In the following shows the plot for the score over episodes. 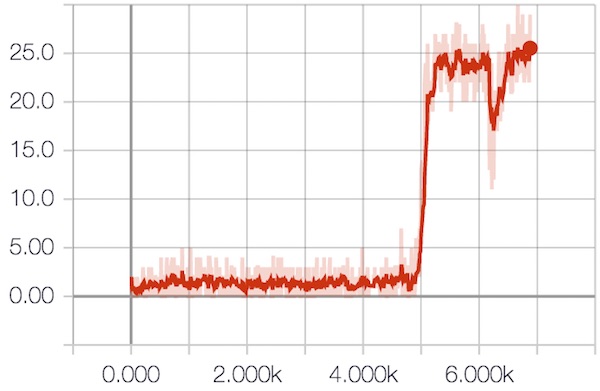 Minigames come as controlled environments that might be useful to exploit game features in StarCraft II. General purpose learning system for StarCraft II can be a daunting task. So there is a logical option in splitting this tasks into minitask in order to advance in research. Mini-games focus on different elements of StarCraft II Gameplay .

To investigate elements of the game in isolation, and to provide further fine-grained steps towards playing the full game, Deepmind has built several mini-games. These are focused scenarios on small maps that have been constructed with the purpose of testing a subset of actions and/or game mechanics with a clear reward structure. Unlike the full game where the reward is just win/lose/tie, the reward structure for mini-games can reward particular behaviours (as defined in a corresponding .SC2Map file).

Regarding scripted agent, there is a python file with several developments. scripted_agent.py is focused on HallucinIce map in which makes Archon Hallucination. Besides there is another class that put all hallucination actions on a list and the agent chooses randomly in between those actions.

How to run mini-games in your environment

Place the .SC2 files into /Applications/StarCraft II/Maps/mini_games/ -sometimes the Map folder might not exist. If so, please create it-

Go to pysc2/maps/mini_games.py and add to mini-games array the following mini-games names

We can copy the sample from Starcraft_pysc2_minigames/Agents/scripted_agent.py to pysc2/agents/scripted_agent_test.py. Subsequently, we can test the scripted sample bot agents with the new mini-games. You should see something like the following.

We need to install the required packages from requirements.txt; however, comment out the package as following:

Install keras-contrib from source by,

After doing the previous mini_games.py modification, you can install the pysc2 manually from source

You can test the installation with the added mini-games by

You can test the new mini-games bot agents from scripted_agent_test.py by

AlphaStar the Next Level?

Watch the “AlphaStar: The inside story”

AlphaStar uses a novel multi-agent learning algorithm. The neural network was initially trained by supervised learning from anonymised human games released by Blizzard. This allowed AlphaStar to learn, by imitation, the basic micro and macro-strategies used by players on the StarCraft ladder.

Subsequently, these were then used to seed a multi-agent reinforcement learning process. A continuous league was created, with the agents of the league - competitors (AI) - playing games against each other, akin to how humans experience the game of StarCraft by playing on the StarCraft ladder. New competitors were dynamically added to the league, by branching from existing competitors; each agent then learns from games against other competitors. This new form of training takes the ideas of population-based and multi-agent reinforcement learning further, creating a process that continually explores the huge strategic space of StarCraft gameplay, while ensuring that each competitor performs well against the strongest strategies, and does not forget how to defeat earlier ones.

Looks like the new level of AI using deep reinforcement learning is promising!