Spatial Reasoning is a logical reasoning system that assumed entities located in space and have a spatial structure. Making machines that can perceive and understand space has always been a researcher’s dream. Our lives could be enhanced by their assistance; with the spatial intelligence of machines, we would have new methods of planning and navigation through spatial orientation.

“What does a system look like when it has spatial reasoning ability?” This is best answered by an example. By writing a Prolog program, we will illustrate the possibility of solving spatial logic puzzles automatically. The following is a typical spatial logic puzzle that is often found in puzzle books.

Five married couples live in houses shown on the map below. 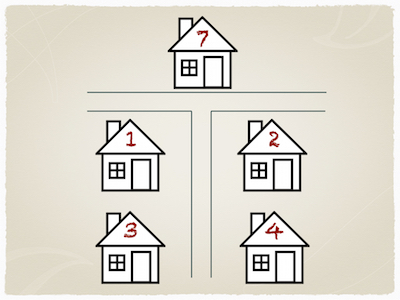 Thanks to Mihaela Malita, we have the extremely useful Prolog Puzzle Solving library. We shall build our spatial puzzle solver in Prolog on top of bibmm.pl. Once the library has been downloaded, the program can be imported as (using SWI Prolog):

After careful analysis of the spatial configuration, we can code the following spatial structure. (Note: in order to save space, we put multiple Prolog statements into one line)

This is intentionally to enumerate all possible topological relations in this puzzle’s spatial structure. We shall improve with the spatial logic system later.

How to run with swipl:

After executing the Prolog program, the puzzle’s solution will be revealed as,

Just in case you don’t now how to exit from swipl:

In the example, we have encoded the spatial structure via their topological relations by enumerating all possible pairwise relationship. This is not a very intelligent encoding scheme, and downright exhaustive. Smart readers will immediately notice, with our spatial intelligence, we have a set of spatial logic that can be applied.

We can see the relations eastof and westof are symmetrical relation, such that we know eastof(X,Y) immediately implies westof(Y,X) by spatial symmetry.

Therefore, without encoding all the symmetrical spatial relations, we could enter a logical rule as,

Then, we don’t need to encode any westof relations because westof can be deduced from the symmetric eastof relation.

Similarly, we can put,

Then, we don’t need to encode any southof relations because southhof can be deduced from the symmetric northof relation.

The set of spatial relations are reduced to encode only eastof and northof relations.

How about the transitive relations? We can reduce northof relations by only encoding the direct northof entities. And let the transitive logical rule taking care of the implicit spatial relationship.

Finally, we can refine the spatial relations to this reduced set, by dropping the northof(7,3) and northof(7,4) indirect northof relations.

Spatial Reasoning is a Logical System

We have illustrated spatial reasoning with a topological language written in Prolog. The spatial entities are implicitly represented as a symbol, in this case, a house number. Alternatively, we can take the route of encoding the spatial entities explicitly by their geometric properties, and then calculating their spatial relations according to the geometric rules of the compass’s cardinal directions. Through this method, the set of topological relations can be generated instead of relying solely on hand coding.

Spatial reasoning is a strategy meant to deduce spatial truth in a logical system. We’re entering the domain of classical logic reasoning, where an object is limited to spatial entity. The rules of reasoning are governed by spatial logic; as a result, a wealth of literatures can be referenced and studied in this area. A good starting point is “The Handbook of Spatial Logics” by Marco Aiello et al..

The spatial logic overlay a structure of possibilities, in which many non-logical spatial situation can quickly be eliminated. This structure is the working premise of spatial validity. We need to follow the strict logical rules of spatial formulas, including the symmetric and transitive spatial rules as illustrated in this article. The indirect spatial relations can be deduced logically. The spatial relation is not necessarily just a simple “compass” rule in which only direction is described. Spatial relation can be generated by any computational geometry, such as convex hull or intersections, allowing for a wider range of spatial reasoning abilities. By understanding this foundation, you may find spatial reasoning to be applicable in many areas of your life, building up a newfound interest in this topic.

UPDATE 2020/09/04 I finally woke up and discovered how to use the amazing clp(fd) - Constraint Logic Programming (Finite Domain) module. Interested reader should continue explore “Solving Puzzles using Constraint Logic Programming in Prolog”, which explains how to use clp(fd) to solve the three types of puzzles, (1) Cryptarithmetic Puzzle, (2) Logic Puzzle and (3) Spatial Logic Puzzle.