Continue from the previous Game Architecture for Card Game Model (Part 1), we defined a game architecture as a reference to study the “Race for the Galaxy” card game. This article focus on the components of (3) Game Engine and (4) Game Interface. 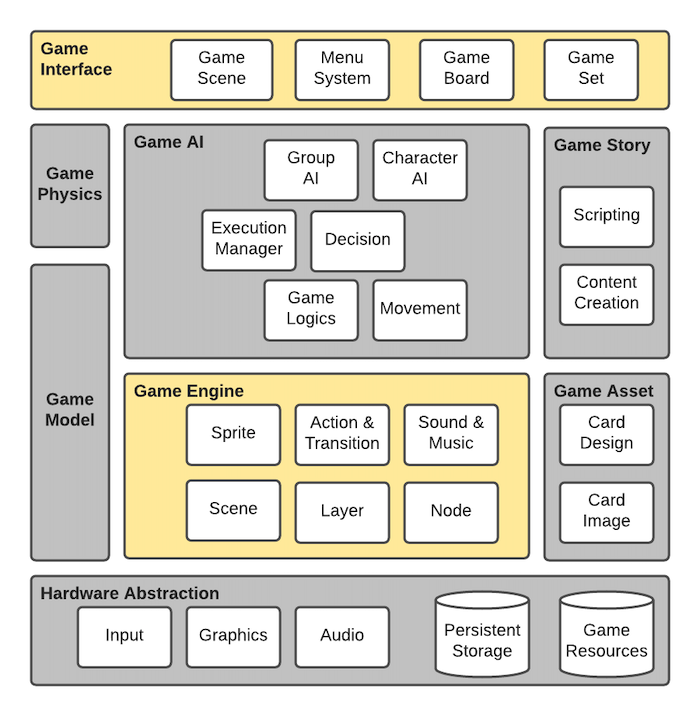 (3) Game Engine - the rules and rendering of a game. The game states and operations are projected on a display. All legal operations are checked and animated on-screen.

(4) Game Interface - the management system of a game. The game preference and setup are an integral part of running a game. The interface allows the player(s) to select optional elements of the game. All legal operations are presented and interacted with the player(s) according to the game rules.

In part 2, we shall continue to describe the game architecture using Race for the Galaxy (RFTG) for our study. As usual, a balance between theory and practice, we set up the Python development to illustrate the object-oriented game engine.

The development experiments on (Part 2) are recorded in the Jupyter Notebook rftg_game.ipynb to quickly run the code samples. Inside Visual Studio code, install the Microsoft’s “Jupyter” extension. When activate the rftg_game.ipynb inside VScode, change the Python kernel to use rftg that has been setup from the code README.md instructions. 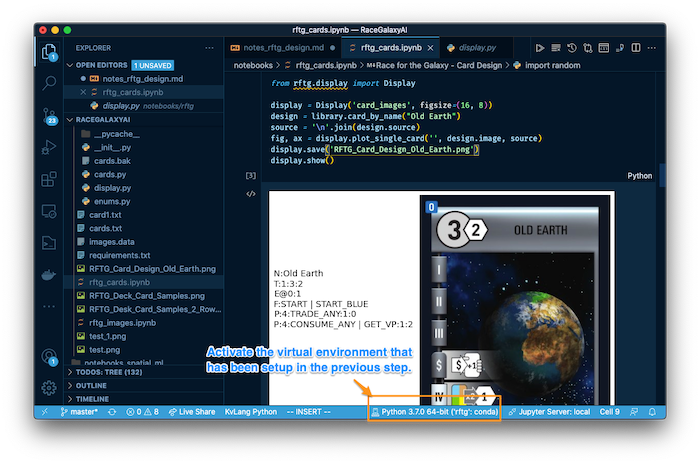 The Game Engine defines a set of rules that players must follow. It also maintains the game states, by using the game information system that tracks the players and the game progress. Extracting from the game data model, the following UML diagram highlights the classes that represent the game engine components.

Game is a session that follows a definite set of rules, a set of players that interact with the game model. At the highest level, a game is a composition of a Deck of cards, a set of Player and the associated GameResource. The resources include the card design library as Library and the card display as CardDisplay. 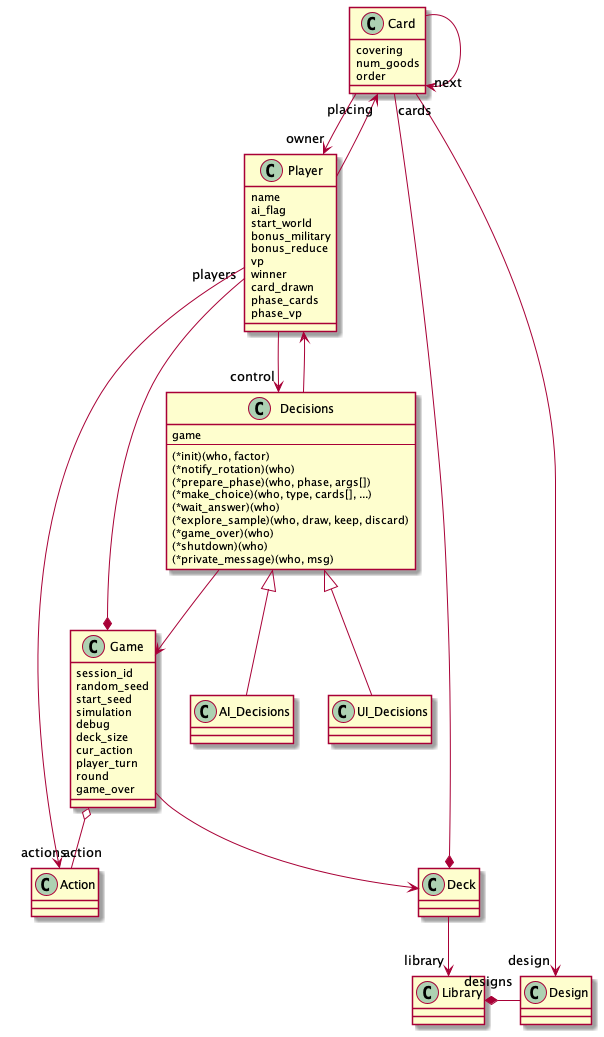 To create a game session, the initialization steps are shown as following:

Later, we shall discuss how the Player delegate the game control to Decision.

The Game can also take start_seed parameter to seed the random number generator. By default, it randomly generates a start_seed if it is not specified. Otherwise, it will take the given start_seed such that a game random sequence can be replayed.

After the game model has been constructed, we shall start with the game’s deck operations, such as picking the start worlds and draw random cards from the deck.

The RFTG’s base game start world Card has the flag of CardFlag.START. The get_cards_with_flag can search the cards to find the start world cards. Once those cards are identified from the deck, we use pick_cards to extract those cards, i.e. removed from the deck. The card.location will be changed from Location.DECK to Location.HAND.

The remaining cards will be shuffled by shuffle_cards. Subsequently, we use draw_cards to draw 6 cards from the deck. The card.location will be changed from Location.DECK to Location.HAND. The drawn cards are assigned to a player, for example, player_index=0.

We must present the game states to an actor, either human or AI, to make a decision. The Decision is an abstract super class that defines all the decision operations that is implemented as UIDecision for human actor and is implemented by AIDecision for a computer AI actor.

The decision object must initialize with the Game model. We shall start with some examples of the decision operations. Since we are using the UIDecision implementation, the game will show the cards for a human input.

Decide on the Start World

The game must present the list of start world cards to an actor, e.g. player 0, to choose a start world. This is just for illustration here. More realistically, the start world will be randomly assigned to the player.

The UIDecision make_choice will route the Choice.START to interactively ask for a start world card. The actor will choose a world, by choosing a number from the list cards, the game will record the player’s chosen start world. 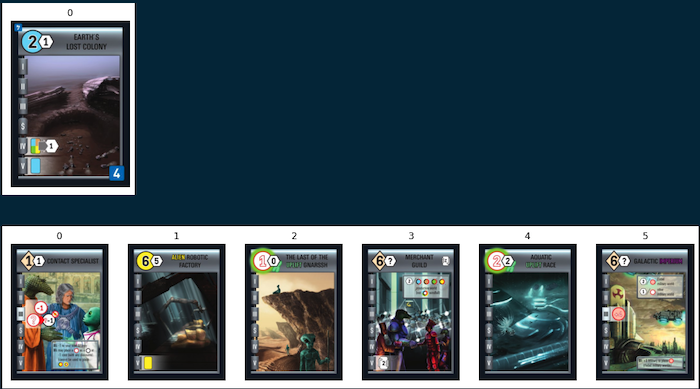 Decide on the Action

The next important actor’s decision is choosing an action. The game must display the list of actions, e.g. for player 0, to choose an action.

The UIDecision make_choice will route the Choice.ACTION, to interactively ask for an action. The actor must choose an action and the game will record the player’s chosen action.

For example, player 0 has chosen action “2”, which is translated to Action.DEVELOP. Then we plot the player’s current action.

Since cards are used as the main currency in the game, player must decide to discard a number of cards as payment for various causes.

For example, the player has chosen to discard cards “1,4”, where the “,” separate the multiple cards selection. The player’s cards Location.ACTIVE and Location.HAND are shown here after the discard action. 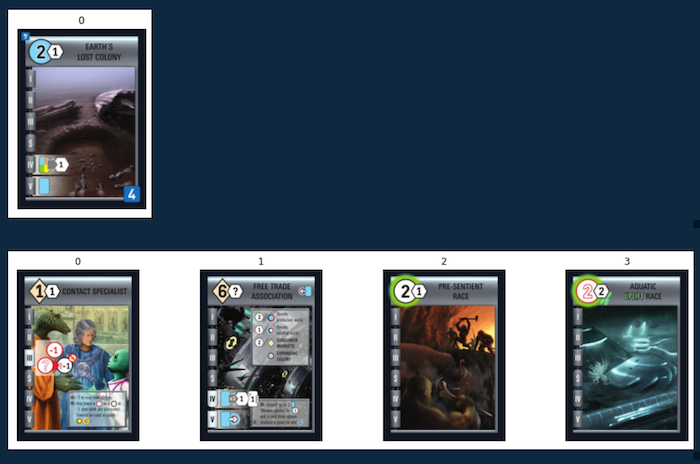 Finally, there are sufficient game functions to show how to construct a complete example of constructing a game model and starting of a game of 2 players.

The game is started with a shuffled deck of cards. For each player, a start world is randomly assigned and 6 random cards are drawn from the deck.

The plot of the player’s “Blue” Location.ACTIVE and Location.HAND cards. 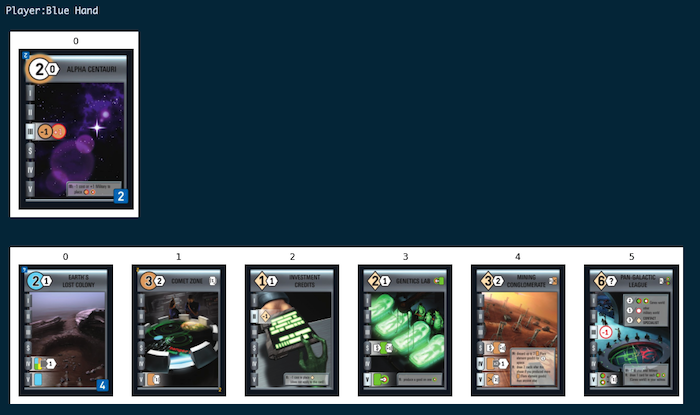 The plot of the player’s “Red” Location.ACTIVE and Location.HAND cards. 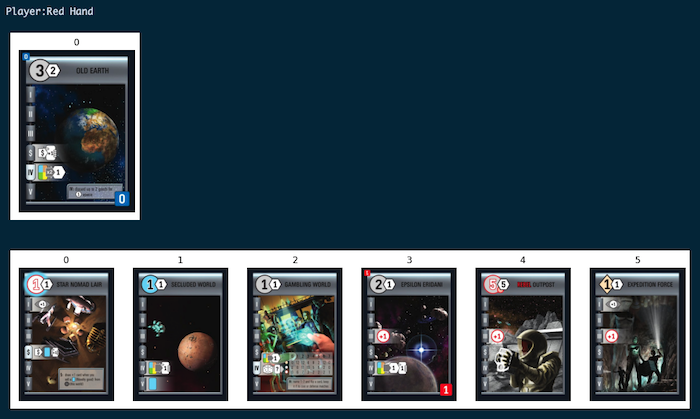 So far, we are using matplotlib to display the game graphics and provide user interaction. The Jupyter notebook approach is purely for experimentation purposes, far from a satisfactory game interface. In this section, we shall start to convert the game interface using a better game framework.

cocos2d is a framework for building 2D games, demos, and other graphical/interactive applications. It works on Windows, OS X and Linux and it is meant to be used by applications written in the Python language.

cocos2d is built on top of pyglet. pyglet is a cross-platform windowing and multimedia library for Python, intended for developing games and other visually rich applications. It supports windowing, user interface event handling, game controllers and joysticks, OpenGL graphics, loading images and videos, and playing sounds and music. pyglet works on Windows, OS X and Linux.

Download and install cocos2d is very simple, which works on any platform.

Patch on the Mac

Apply the following patch to fix the problem the rentina display problem on Mac, then it will work!

Read and Display the Cards

In the Library, we shall read the card image as pyglet image format so that it is ready to be used as a texture.

Notes, if we want to import as PIL image, we can use the following code to convert it into pyglet image.

We need to load the cards library and prepare the game deck.

To use cocos2d, the following classes are minimum requirements to construct

We shall define CardsContainer, which is subclass of cocos Layer, to collect a set of CardLayer. The cocos Layer can be recursively contain other Layer classes. The CardsContain responsible to layout and interact with the cards.

The CardLayer is also a subclass of cocos Layer. It is responsible to hold the card image and its display state. For example, if the card has been selected or not.

The cocos2d Director is responsible to create and run the animations. All cards Sprite is defined and insert into a Scene. The Director will take the Scene and run the nodes within it.

Figure. Showing the card game is designed and rewritten in Python. The game UI and animation are done using Cocos2d - Python edition. (credits: Rio Grande Games holds the copyrights for the images)

We have explored (3) Game Engine and (4) Game Interface development. The game states are presented to an actor, either human or AI, to make a decision. This part shows the UIDecision for a human actor, to illustrate the usage of the abstract Decision class. The AI agent will drive the AIDecision implementation in the next article (Part 3). Towards the end, we converted the Game Interface to use cocos2d - Python edition. The card game experiment starts to look a lot more interesting.

Race for the Galaxy