Machine Learning is dominated by ANN (Automated Neural Network), it requires a large training data set of labelled data to learn a classification model. When only a small data set is available, the decision tree & its variant random forests dominated the classification. In this article, we shall explore the Dempster-Shafer Theory as the theoretical basis for classifiers on a small data set, where classification is operated on the principle of combining pieces of evidence. 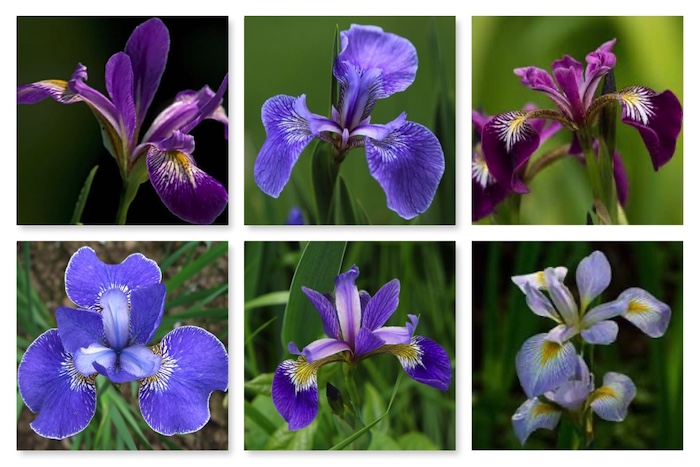 Figure. Images of Iris spieces. We shall attempt to use the petal width, petal height, sepal width, sepal height measurements to perform classification for the classes of Iris Setosa, Iris Versicolour, or Iris Virginica in this article.

Dempster-Shafer Theory [DST][GS76][GS90] is a mathematical theory of evidence, offers an alternative to traditional probabilistic theory for the mathematical representation of uncertainty. The significant innovation of this framework is that it allows for the allocation of a probability mass to sets or intervals as opposed to mutually exclusive singletons. In contrast, Bayesian inference requires some a priori knowledge and is unable to assign a probability to ignorance. D-S is a potentially valuable tool for the evaluation of risk and reliability in engineering applications when it is not possible to obtain a precise measurement from experiments, or when knowledge is obtained from expert elicitation. An important aspect of D-S theory is the combination of evidence obtained from multiple sources and the modelling of conflict between them.

The motivation for selecting D-S theory can be characterized by the following reasons [SF02]:

Using our philosophy of learning by doing, we shall take the practical approach to demonstrate how to use Python pyds Dempster-Shafer module. Starting with some experiment with Dempster-Shafer belief functions, then we shall progress into classification on the “Iris Plant Dataset” [IPD] using D-S theory. The result is achieving 96% accuracy, which is comparable to other ML models.

Press y to proceed. This will install the Python version and all the associated anaconda packaged libraries at `{path_to_anaconda_location}/envs/crypto

Then activate the virtual environment by,

pyds is a Python library for performing calculations in the Dempster-Shafer theory of evidence. This is the best and most comprehensive in the following aspects,

Ensure that you are in the virtualenv,

or it is as easy to install from the downloaded source https://github.com/reineking/pyds

The other modules are required to run our experiments,

These modules are important but not described in details because of this article focus on D-S theory. We shall just use them as processing and displaying tools.

When an expert made an observation on some evidence, he could say,

The statement about “Probably \(a\) or \(b\)” can be translated into \(A = \{a, b\}\), one abstains from making any statement about whether \(a\) is more probable than \(b\). Instead, such an assignment expresses complete ignorance about this question. There are several equivalent representations for quantifying belief within the D-S belief function framework. The four most important representations are [RT14], 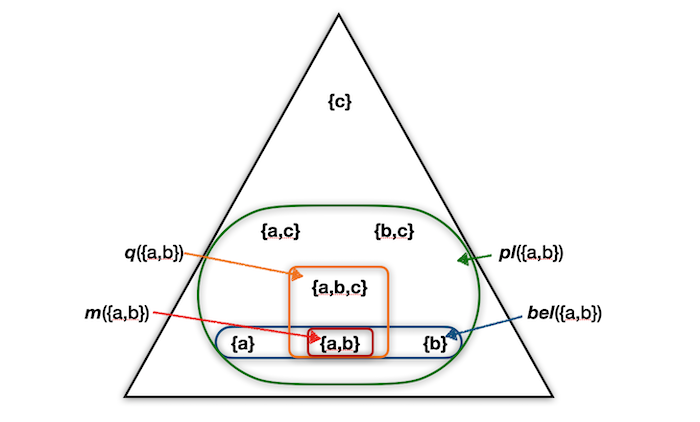 Figure. Illustration of different belief function representations. The frame of discernment \(\Theta\) consist of three elements \(a, b, c\) in this examples. The triangle contains all subsets of \(\Theta\) except for \(\emptyset\). The indicated sets correspond to the mass of the different belief representations \(m, bel, pl,\) and \(q\) associated with the set \(\{a,b\}\).

Let’s test the various belief functions from the pyds MassFunction,

You can try to test your understand of all belief functions to check with the calculated values.

Alternatively, the MassFunction can be constructed in many different ways, for example,

We can get the MassFunction frame of discernment, and the powerset by,

We can see pyds MassFunction is using the frozenset, “frozen set” is just an immutable version of a Python set object. While elements of a set can be modified at any time, elements of the frozen set remain the same after creation. Due to this, frozen sets can be used as keys in Dictionary or as elements of another set. But like sets, it is not ordered (the elements can be set at any index).

Specifically, the combination (called the joint mass) is calculated from the two sets of masses \(m_1\) and \(m_2\) in the following manner:

\(K\) is a measure of the amount of conflict between the two mass sets.

Although we are using pyds, its MassFunction has the built-in combination rules. This is still worthwhile to read the following DempsterRule script helps to bring the combination rules into the spotlight with just 10 lines codes.

The result of combination is,

Now, back to using pyds D-S combination rule combine_conjunctive() (also defined as a convenience AND (&) operator),

The result of the combined MassFunction is automatically normalized to be the sum of 1.

Equipped with the D-S theory knowledge, and the usage of pyds MassFunction, the following sections describe the classification on the “Iris Plant Dataset” [IPD] using Dempster-Shafer theory.

The Iris Plant Dataset [IPD] is another standard benchmark problem of UCI datasets. It is a popular choice for testing with classification. The dataset has 150 data items with the following four numeric attributes; Sepal Length, Sepal Width, Petal Length, and Petal Width (all in cm). The classes are the plant types, namely; Iris Setosa, Iris Versicolour, or Iris Virginica, with each class containing 50 samples.

The frame of discernment \(\Theta\) for the IPD is {Setosa, Versicolour, Virginica}, and the chosen initial classification step allows for seven possible hypotheses (the power set of \(\Theta - \emptyset\)):

Continue to import the popular analytic modules to perform some basic data analysis on IPD,

Randomly select 10 samples from the IPD DataFrame to get some feeling about the data, notice the Class column is the expected classified Iris class. 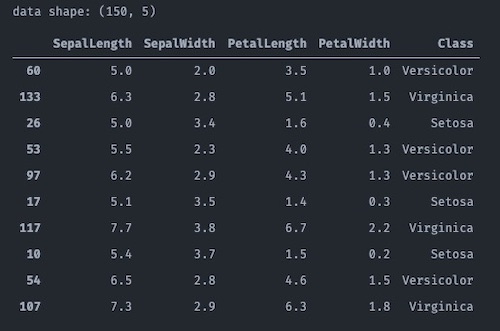 For each attribute, we shall plot each class data distribution for further observations. 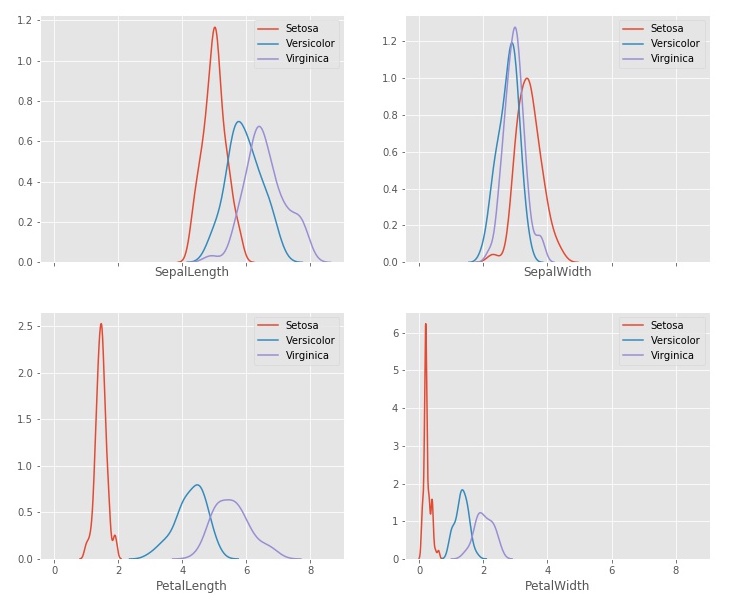 From the distribution plots, we can conclude Setosa class is easily separatable by using PetalLength and/or PetalWidth attributes. However, we expected that Versicolor and Virginica classes, will create the most challenges for the classifier.

Following the strategy outlined by [QAUC14], Data Classification Using the Dempster-Shafer Method, the classification can be expressed as a series of steps:

The [QAUC14] does not provide any implementation. We shall follow their research direction to implement a solution in Python to test.

1. Define the frame of discernment

The IPD frame of discernment (\(\Theta\)) is coming from all the unique Class values in the DataFrame df.

Here is the power set of the frame of discrenment, where the frozenset() is the empty set.

Since IPD attributes are all numeric data, the easiest way to determine a class membership is by the attribute’s minimum and maximum values. Later, we shall use these attribute data ranges to assign the class membership.

For each attribute, we found the class’s data range of [min, max] values,

i.e. the uncertainty m(\(\Theta\)) is fixed at 0.1. For data items assigned to two possible classes x and y:

For data items assigned as possibly belonging to all three classes:

i.e. the greatest uncertainty where \(m(\Theta)\) is 1, zero knowledge of a specific hypothesis.

The system combines the mass values from all four attributes using DRC, thus producing overall mass values for all hypotheses, and the hypothesis with the highest belief value is used to classify the data item. If the hypothesis does not represent a single class, then a second step is necessary.

In the second step, for each attribute, standard deviations (\(sd\)) are calculated for each individual class in question and for the union of those classes. The Feature Selection Value (\(FSV\)) is then calculated based on:

where n is a natural number representing the number of classes. The attribute a that has the smallest \(FSV\) is selected, and the absolute difference \(d\) (distance) between the data item’s \(a\) value and the mean \(a\) value is calculated for each class,

The data item is classified as belonging to the class \(x\) with the smallest \(d\) value.

After call the min_fsv_attr, we know the best attribute that has smallest \(FSV\) is PetalWidth.

The complete classification workflow is illustrated in a flow chart, 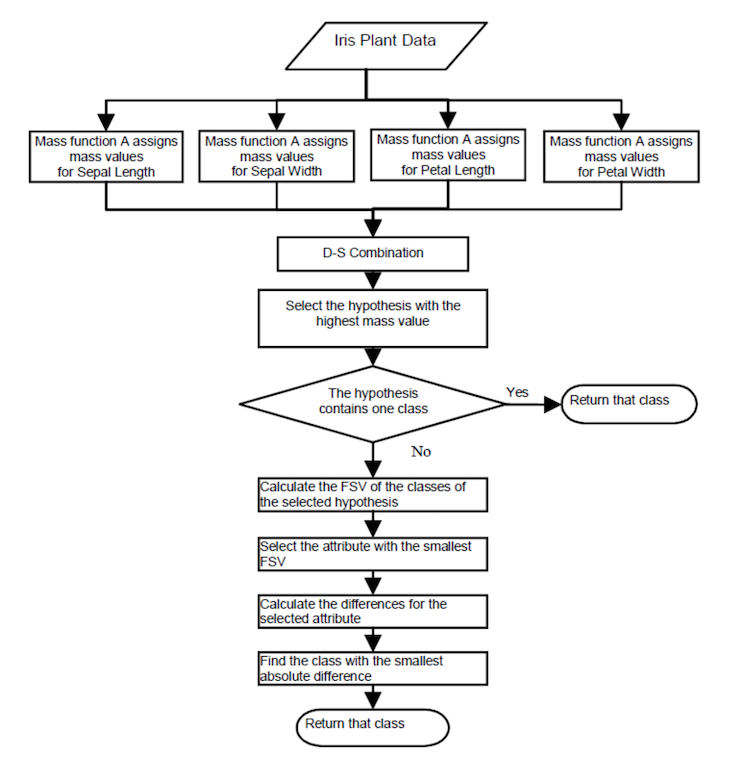 Combining with the former code fragments and the following code, the D-S Classifier implementation is completed.

The reported prediction accuracy is 96%!

The results suggested that this particular D-S classifier is equivalent to other leading approaches in its ability to classify items with multiple classes and fewer attributes.

Dempster-Shafer based classifiers have the flexibility to be designed in solving any given problem. In particular, we can decide how the mass functions should be constructed or how the data combination should be organized. One can build mass functions that are as simple or as complex as desired, and Dempster’s rule of Combination can be applied many times using different strategies. This is a distinct advantage in that it allows the creation of systems tailored towards a given problem domain, but it may be argued that it is also a disadvantage, since it does not permit the generalization of results to all domains.

Both theoretical and practical advantages of D-S has been reiterated in many D-S applications. D-S does not require a priori knowledge (data labels), making it suitable for unsupervised classification - possibly classifying previously unseen information, for example, if the aim is to detect previously unseen network attacks in computer systems. Furthermore, a value for ignorance can be modelled, providing information on the uncertainty of an observation.